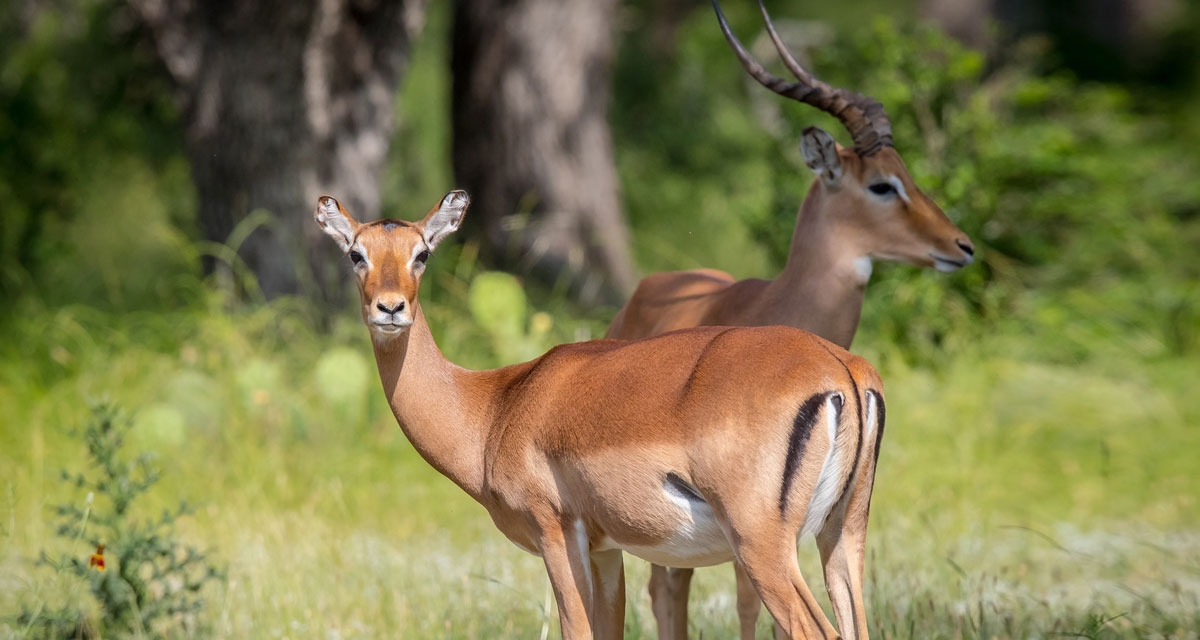 The impala is a medium-sized, slender antelope similar to the kob or Grant’s gazelle in build. The head-and-body length is around 51 in. Males reach approximately 30–36 in at the shoulder, while females are 28–33 in tall. Males typically weigh 117–168 lb and females 88–117 lb. Sexually dimorphic, females are hornless and smaller than males. Males grow slender, lyre-shaped horns 18–36 in long. The horns, strongly ridged and divergent, are circular in section and hollow at the base. Their arch-like structure allows interlocking of horns, which helps a male throw off his opponent during fights; horns also protect the skull from damage.

The glossy coat of the impala shows two-tone coloration – the reddish brown back and the tan flanks; these are in sharp contrast to the white underbelly. Facial features include white rings around the eyes and a light chin and snout. The ears, .67 in long, are tipped with black. Black streaks run from the buttocks to the upper hindlegs. The bushy white tail, 12 in long, features a solid black stripe along the midline. The impala’s coloration bears a strong resemblance to the gerenuk, which has shorter horns and lacks the black thigh stripes of the impala. The impala has scent glands covered by a black tuft of hair on the hindlegs. Sebaceous glands concentrated on the forehead and dispersed on the torso of dominant males are most active during the mating season, while those of females are only partially developed and do not undergo seasonal changes. There are four nipples.

The impala has a special dental arrangement on the front lower jaw similar to the toothcomb seen in strepsirrhine primates,which is used during allogrooming to comb the fur on the head and the neck and remove ectoparasites.

Males are sexually mature by the time they are a year old, though successful mating generally occurs only after four years. Mature males start establishing territories and try to gain access to females. Females can conceive after they are a year and a half old; estrus lasts for 24 to 48 hours, and occurs every 12–29 days in non-pregnant females.The annual three-week-long rut (breeding season) begins toward the end of the wet season, typically in May. Gonadal growth and hormone production in males begin a few months before the breeding season, resulting in greater aggressiveness and territoriality. The bulbourethral glands are heavier, testosterone levels are nearly twice as high in territorial males as in bachelors, and the neck of a territorial male tends to be thicker than that of a bachelor during the rut. Mating tends to take place between full moons.

Rutting males fight over dominance, often giving out noisy roars and chasing one another; they walk stiffly and display their neck and horns. Males desist from feeding and allogrooming during the rut, probably to devote more time to garnering females in estrus; the male checks the female’s urine to ensure that she is in estrus. On coming across such a female, the excited male begins the courtship by pursuing her, keeping a distance of 9.8–16.4 ft from her. The male flicks his tongue and may nod vigorously; the female allows him to lick her vulva, and holds her tail to one side. The male tries mounting the female, holding his head high and clasping her sides with his forelegs. Mounting attempts may be repeated every few seconds to every minute or two. The male loses interest in the female after the first copulation, though she is still active and can mate with other males.

Gestation lasts six to seven months. Births generally occur in the midday; the female will isolate herself from the herd when labor pain begins. The perception that females can delay giving birth for an additional month if conditions are harsh may however not be realistic. A single calf is born, and is immediately concealed in cover for the first few weeks of its birth. The fawn then joins a nursery group within its mother’s herd. Calves are suckled for four to six months; young males, forced out of the group, join bachelor herds, while females may stay back.