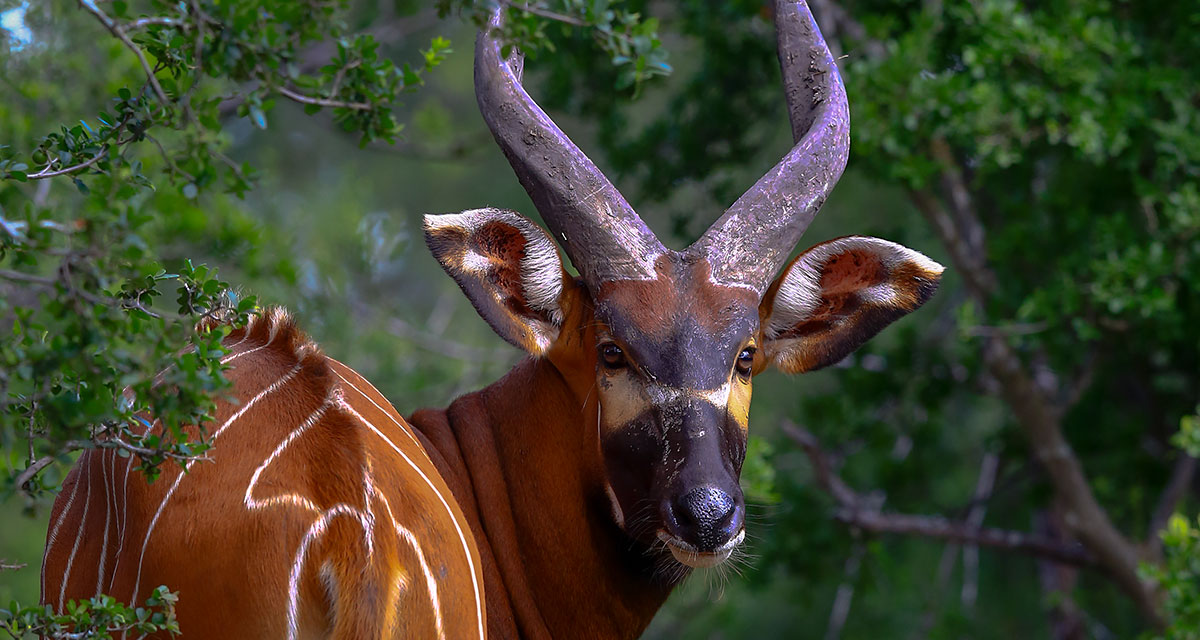 In the last few decades, a rapid decline in the numbers of wild mountain bongo has occurred due to poaching and human pressure on their habitat, with local extinctions reported in Cherangani and Chepalungu hills, Kenya.

The Bongo Surveillance Programme, working alongside the Kenya Wildlife Service, have recorded photos of bongos at remote salt licks in the Aberdare Forests using camera traps, and, by analyzing DNA extracted from dung, have confirmed the presence of bongo in Mount Kenya, Eburru and Mau forests. The programme estimate as few as 140 animals left in the wild – spread across four isolated populations. Whilst captive breeding programmes can be viewed as having been successful in ensuring survival of this species in Europe and North America, the situation in the wild has been less promising. Evidence exists of bongo surviving in Kenya. However, these populations are believed to be small, fragmented, and vulnerable to extinction.

Animal populations with impoverished genetic diversity are inherently less able to adapt to changes in their environments (such as climate change, disease outbreaks, habitat change, etc.). The isolation of the four remaining small bongo populations, which themselves would appear to be in decline, means a substantial amount of genetic material is lost each generation. Whilst the population remains small, the impact of transfers will be greater, so the establishment of a “metapopulation management plan” occurs concurrently with conservation initiatives to enhance in situ population growth, and this initiative is both urgent and fundamental to the future survival of mountain bongo in the wild.

The western/lowland bongo faces an ongoing population decline as habitat destruction and hunting pressures increase with the relentless expansion of human settlement. Its long-term survival will only be assured in areas which receive active protection and management. At present, such areas comprise about 30,000 km2, and several are in countries where political stability is fragile. So, a realistic possibility exists whereby its status could decline to Threatened in the near future.

As the largest and most spectacular forest antelope, the western/lowland bongo is both an important flagship species for protected areas such as national parks, and a major trophy species which has been taken in increasing numbers in Central Africa by sport hunters during the 1990s. Both of these factors are strong incentives to provide effective protection and management of populations.

Trophy hunting has the potential to provide economic justification for the preservation of larger areas of bongo habitat than national parks, especially in remote regions of Central Africa, where possibilities for commercially successful tourism are very limited.

The eastern/mountain bongo’s survival in the wild is dependent on more effective protection of the surviving remnant populations in Kenya. If this does not occur, it will eventually become extinct in the wild. The existence of a healthy captive population of this subspecies offers the potential for its reintroduction.